This scene represents one of the highlights of my life. The context of the expedition was that it was in the middle of what I propose to be the first World Park, the virtually untouched zone between southern Venezuela and northern Brazil.

In 2013 and 2014, I led expeditions to the unexplored Meseta de Ichúm in the Venezuelan Amazon. We traveled up the Ichúm River to try to discover its source. Even the local people had never ventured more than a few kilometers inside this 70 kilometer-long ancient tepui. In this photo, we reached Jaguar Falls, the first humans to do so. From there, we established another nine camps southward, arriving near the center of the Meseta.

The experience was arduous, dangerous and, to an equal extent, rewarding. Beginning in the north of the Meseta in 2013, a group of five (three Shiriana Indians, a man from Caracas and myself), cut through forest. Progress amounted to about 2 kilometers a day. That year, we established eight camps up the Ichúm River. In 2014, we returned with two rafts made of PVC and plastic webbing, each weighing a total of 18 kg. Each was powered by a small 2 horsepower outboard motor. When we came to impassable rocks, rapids, or waterfalls, we sometimes were forced to disassemble the rafts and pack them through the forest. We established 23 camps up the Ichúm. After a month of overcoming a myriad of challenges, including being abandoned by all by one of the Shiriana Indians, three of us – Janeiro (a Shiriana), Telly (a man from Caracas) and myself – reached one of the goals of the expedition: the tributary marking the north side of the Meseta’s dome-like feature in the south. Just before Camp 21, we discovered an insect never found before in Venezuela. (See below.)

Rain splatters and pitter-patters on the black plastic roof of our makeshift shelter. I am lying in my hammock and write by the light of my headlamp. Today was a great day, a big day, an important day. I led the first trip out. Every day I drive one of the boats and always lead in the first trip, but today, instead of going back and forth, I just hung out at Camp 13. I let Joel (a Shiriana) do the next two trips, shuttling the gear.

In the evening, at 5:15pm, just after Janeiro and Joel arrived with Antonio and Telly, Rafael and Alfonso came with me on foot to explore further south upriver in the raft. For 45 minutes, the river was like glass. When we returned, I looked at the map and calculated where we’d been. I was heartened to see that the tributary we’d passed was the one on the map and that it would be possible to reach the waterfall tomorrow.

I woke at 4:15am and started to get ready, the objective being to arrive at the base of the large waterfall today. I made hot chocolate and oatmeal for Alfonso, Joel, Janeiro and myself, the four of us being the lead and early group… We arrived at a point where there were rapids and rocks and we could no longer proceed upriver using rafts. Any-way, the topo map indicates a high waterfall just a kilometer or so upstream. We will have to dismantle the rafts and find a way above the waterfall through the forest… Now Janeiro and Joel are fetching the others. I lay on this sandy beach, writing. Soon I will cut and wade my way to the waterfall with Alfonso. Perhaps the two of us will be the first humans to see it from the ground. Yet none of us know whether there are Waica (i.e., wild indigenous people) living somewhere within the Meseta. (The Shiriana are terrified of the Waica.)

It is quiet, with the exception of the fast-running water and noise from the occasional insects. The biting bee-like creatures force me now to go find my repellent.

Now, the day is over. I had the most amazing afternoon of my life. On the way upriver to the falls, Rafael and Alfonso were about 25m ahead of me. I was walking up some rocks and about to walk down the other side when, suddenly, a jaguar passed 5m in front of me. It was an extraordinary moment. Not even a trace of fear when through me. I felt no fear at all. My only impulse was to immediately and deliberately reach for my camera bag to see if I had enough time to photograph the jaguar! It was so unexpected that I didn’t have time to think about anything else. My reaction of being totally unafraid is curious to me.

When I first saw the jaguar, it was just off to my left. It was coming from between two large boulders on the riverside. It walked without looking right or left. It looked young. I say that because it was incredibly perfect. It was beautiful and healthy-looking. Its movements, seemingly silent, were very graceful. Within seconds the jaguar was past me. It leapt upward into the steep forest and was gone.

I guessed that it had noticed Rafael and Alfonso and was waiting for them to pass before crossing up into the forest. I am quite sure it did not notice me. I guess that the reason I felt no fear is because I felt no danger.

I looked ahead. Rafael and Alfonso, Shiriana who usually notice many things that I don’t, seemed to be walking on without a care. I called out to them.

There was a sound of a bird or some animal crying up in the direction where the jaguar had gone. “What animal is that?” I asked. For a moment, I was under the impression that the jaguar was taking prey. I urged Alfonso and Rafael to go up and look with me. As the cries of the animal continued, I deduced the jaguar had not taken it, for had that been true, the animal would have been silent by then.

My two Shiriana companions and I moved on upriver. Soon thereafter, I took a video of myself explaining what had happened. Not long after that, the waterfall began to be visible. It was spectacular, roaring off of a stone escarpment about 60m high.

On the return to Camp 14, I suggested to Alfonso and Rafael that we look for the footprints of the jaguar. They did not want to search, saying it was dangerous. I offered 1000 Bolivares (about $15 on the black market) if they could find a footprint of the jaguar so that I could photograph it. We went up into the forest above the place where I’d seen it. We found nothing. We walked back in the rain.

In memory of my experience, I named the waterfall “Jaguar Falls.” The Shiriana translated that into Shiriana: Bora Jaguar.

This page is an excerpt from my Explorers Club report from 2013. In 2014, we got considerably further south. 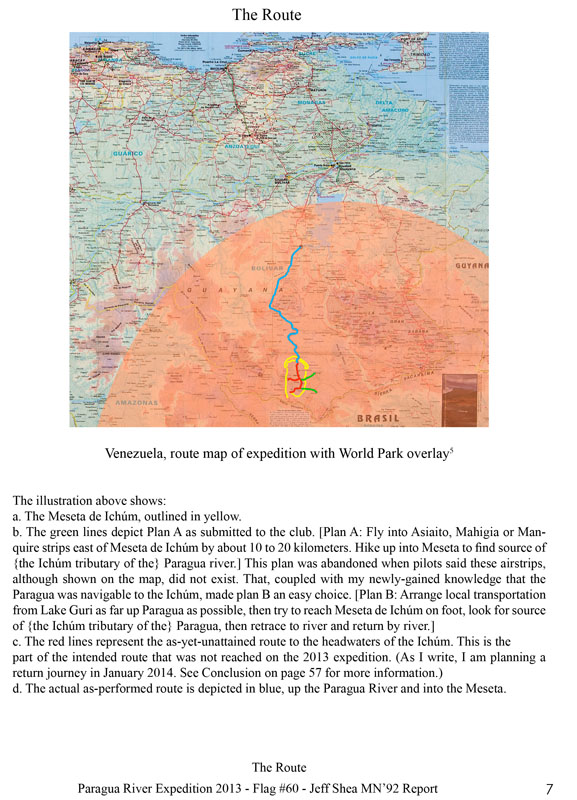 Explorers Club Report. At the time of this printing, the 2014 report has not yet been published.

It keeps running through my mind – the image of the jaguar. It was surprisingly beautiful. Now, my recollection is fighting my intellect (i.e., what I know what a jaguar looks like). On the crude diagram I’d made yesterday – when the image was fresh in my mind – I noted that there were black markings on a skin of tan, pale yellow and white. The cat was almost two meters long, not including its tail.

Bactrophora Dominans, as collected in 2014. I collected this specimen deep within the Meseta. This is the first Bactrophora Dominans ever found in Venezuela. Only a few collected specimens exist in the world. A paper was written and published in Check List, a scientific journal. (See next page.)

It’s almost like a curse in a way, that I had seen it but I was not able to take a photo. From the time I saw it till it was gone was probably only 5 seconds, 10 at most. I remember looking at my camera bag to figure out if I could open it in time, then realizing that it was not going to be possible. One second it was moving from my left peripheral vision to the center of my vision. Another second, it was taking a couple of more steps forward. Three seconds, it was moving away to my right. I looked at my camera bag. Four seconds, I looked up again and saw it springing up the steep slope. By about five seconds, it was gone.

It was either Telly or Antonio (two of the men on the expedition) that told me that on average, there is one jaguar for every 100 square kilometers. That information added to my sense of just how remarkable it was to have such a close encounter with one of the most beautiful creatures on the planet. 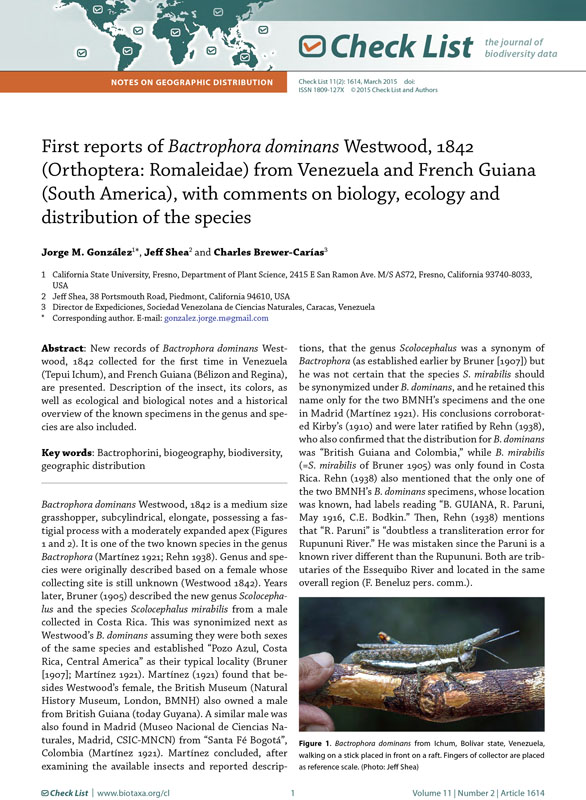 Telly (José Luis Rodríguez Castillo) first pointed the Bactrophora Dominans out to me as we moved upriver in our raft. I photographed then collected this remarkable insect deep within the Meseta de Ichúm. (I was carrying vials and preservative alcohol for the collection of insects.) I later showed the photo to famed Venezuelan explorer, Charles Brewer-Carias. He took an interest in it, then assembled a team of entomologists, who identified it as the only specimen of B. Dominans ever found in Venezuela. A paper was published in Check List, the journal of biodiversity data in 2015. 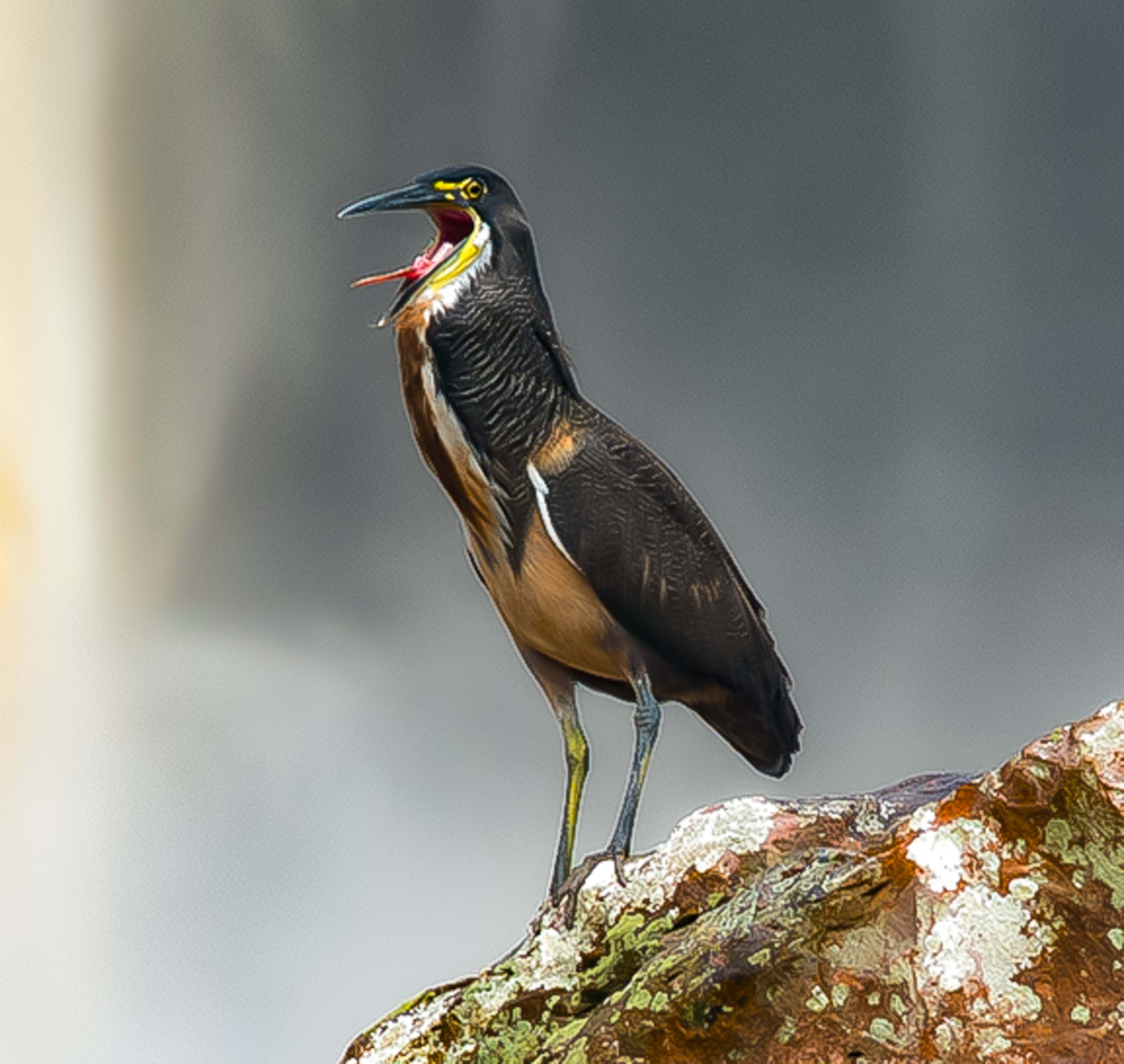 Close-up of Tiger Heron at Jaguar Falls, 2014 Venezuela, Bolivar Province (State) It took me a half hour to stalk this bird in order to photograph it, as I only had a 24-120 mm lens. I crawled over rocks, stopping frequently, until I was within about 20 meters of it.

Perro de Agua, 2014 Venezuela, Bolivar Province (State) South of Camp 23, only kilometers from our most southerly penetration into the Meseta, Janeiro, Telly and I encountered a family of giant otters. They were as curious as we were. They had never seen humans before. Likewise, we had never seen the likes of them.