Hiking to Machu Picchu on the Inca Trail, Peru, 1979 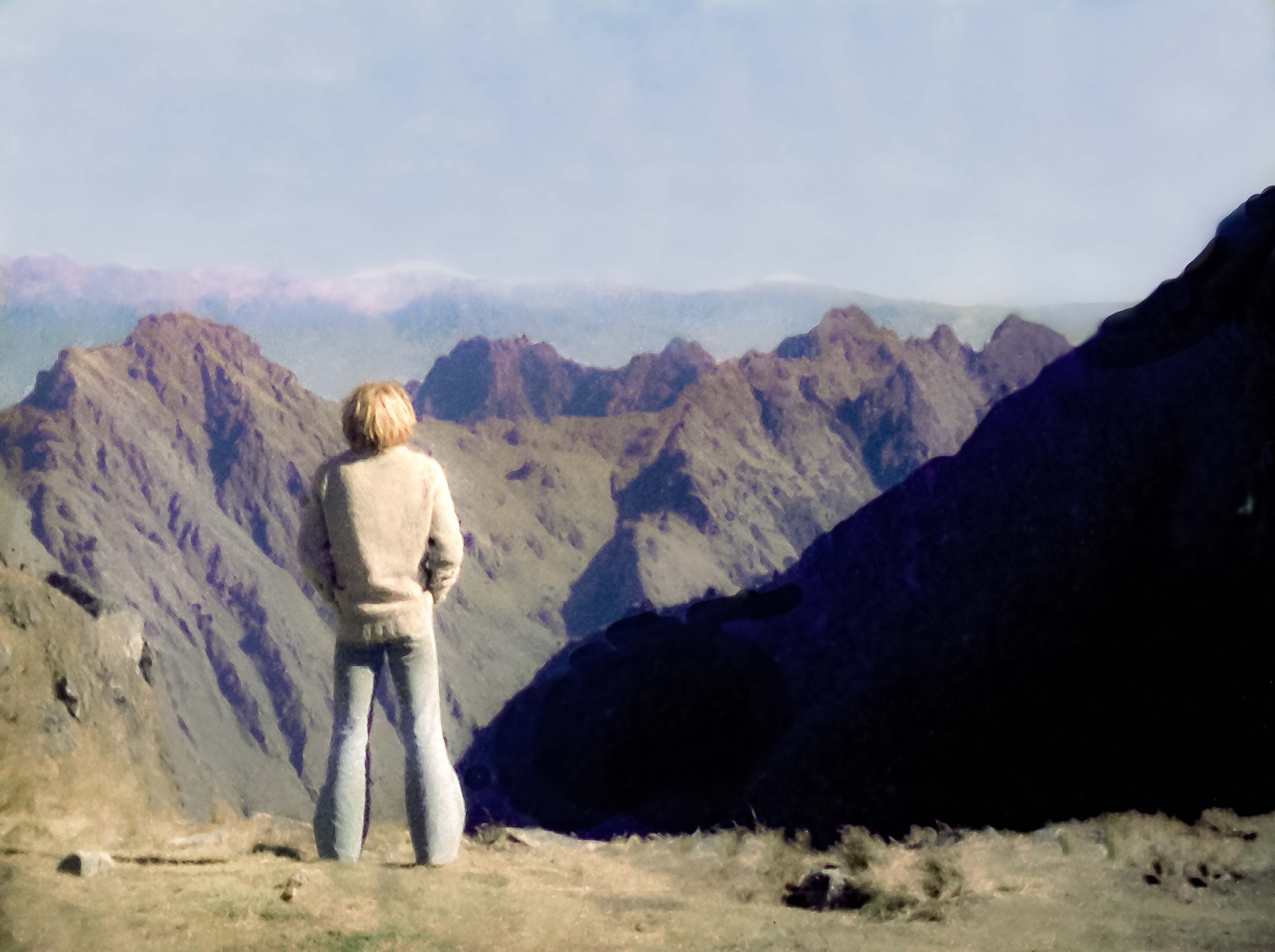 I’ve today found a new reverberation within me – getting over the failure of the H.R.’s (The Hopeless Romantics, my rock group) – regaining confidence – with a golden aura inside me.

Debbie and I were able to leave today to hike the Inca Trail to Machu Picchu. We did all our chores, like renting a tent, etc. At 2:25pm, the train left Cuzco. We bought first class tickets, but you never would have known it – you had to walk over people to get to the end of the car! We got to Kilometer 88, the trail head, just before dark. We took a trolley across the river – 10 seconds – and hiked in the dark till the ruins of Llactapa, where we set up our tent. The mountains silhouetted against a sky profuse with stars that twinkled like Christmas ornaments, rendering the scene incredible. On the flat, our orange tent glowed like a flashlight, illuminated by the candle within. Debbie and I ate a delightful albeit cold repast (since we have no stove) then enjoyed each other.

Today was awesome. We began hiking in the morning from Llactapa, at an elevation of about 2600 meters. We hiked to Llulluchapampa (3800m), an alpine plain just above the tree line. It’s just below the first pass (4200 meters). My packed weighed about 40 pounds. From the turn in the trail at Huay Llabamba, I had a very rough time of it.

We didn’t arrive till about 6pm, just before sunset. Although we took a lot of rests and a good long stop at a meadow, I was almost delirious when we arrived at the alpine pampa, due to fatigue and the thin air of the Andean highlands. We immediately set up the tent and fell asleep after eating. I awoke a few hours later, ate some more and went back to sleep. I was very, very fatigued.

The scenery is magnificent. Although tired, when I look back at the highest snow-covered peak, standing above the other white tops – as if she were queen and they princesses – my soul is refreshed.

Although it gets hot when the sun shines up here, last night left frost on the inside of our tent. We were up early and hiking by 7am. I reached the 4200-meter pass at 8am. Later, Debbie arrived. She and I rested there. We descended the valley then ascended again to Runkuraqay, an Inca ruin. There, we lay resting in the warm sun, with a light cool wisp of wind coming up occasionally. From Runkuraqay, we crossed the second pass at 12,696 feet. We walked down to the ruins of Sayaqmarca – (Note: 13 stone windows, standard room.) We looked around and camped below. We bathed in the ice-cold stream and sat in the sun to dry and smoked half a joint. At sunset, which was spectacular, Debra and I went inside. She said, “You’re a very sexy man… I want to…” So she did, and it felt so good… After… she and I made love… I dreamt heavily about Toniça (the girl I’d left behind in New Orleans) for the second night in a row.

Waking in Sayaqmarca, we took a wonderfully pleasant hike through frost-covered jungle, with mosses of orange, red and yellow, then over the third pass, where we rested. Then we hiked to Wiñaywayna. We rested there and I wandered around the ruins. I thought very highly of these ruins and their location high above a river gorge. We trudged off to Inti Punku. We arrived at Machu Picchu as the sun was setting behind the mountains. There it was. Although we had seen the back of it earlier today, this was the first time I had seen the Citadel fully. It was spectacular, one of the most majestic sights I’ve ever seen.

We walked down to the river, where we were promptly kicked out by a rude man with a whistle. We walked to Aguas Calientes. After dinner, we walked up the dark hillside to bonfire-lit mineral baths. We paid 30 Soles, got in, then bathed illegally in the shadows. I marveled at being there under the stars.

My goals in this life are 1. To win the long-lasting, life-long love from a woman I love and her companionship, 2. To have a nice home in an area that pleases me, 3. To have a respectable, well-paying profession, 4. to have two or three healthy, well-loved and so-contented children with means to raise them properly, so they can choose their lives and be able to pursue them, 5. To have peace in my soul and know happiness almost every day in my life if I possibly can, 6. To be a respected, successful songwriter and musician and to prosper financially at it, 7. To travel and visit all the lands of the earth, 8. To be a wealthy man, 9. To leave this world making it a little better, to help people, to bring happiness to those I can, to help others find faith and hope in themselves, or to help in whatever way I can. P.S. – a 10th goal: to have the real respect and sincere praise from my family and if possible, friends, and if possible, people in general.