As an update to below, see my Explorers Club report under Adventure Writing for the 2013 expedition. I have also just completed the 2014 Meseta De Ichun (Ichum) expedition on March 28. I story will follow.

Here is an update. Venezuela. 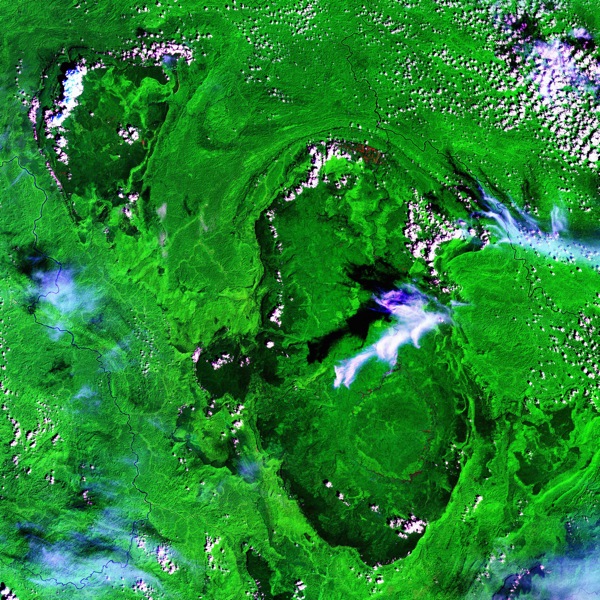 (Credit for this satellite image to be posted when I get the information – This image covers a square 111 kilometers by 111 kilometers, or about 68 miles x 68 miles)

Meseta de Ichun lies between 4 and 5 degrees north latitude and 63 and 64 degrees west longitude. It is the large oval figure in the center right of this spectacular satellite image. On a hunch, I concluded this was one of the most remote areas left on the planet, particularly in temperate regions. It is the north Amazon, but it is at altitude, between 1000 and 5000 feet of elevation. Incredibly dense forest makes travel so difficult that it could take a day to go one kilometer. But the river (see upper edge of the Meseta toward the right) is a possible means to penetrate into the bowl of the Meseta. Meseta De Ichun is a “tepui.” It is one of, if not the biggest, in the world. A Tepui is a geographic landform of a flat-topped mountain jutting out of the landscape. This is the region of the Lost World, as depicted in the movie “Up.” To the east, lies the highest waterfall in the world (3,212 feet, or 979 meters), which falls out of Auyan Tepui. There is no record of any expedition, scientific or otherwise, penetrating into the interior of the Meseta or to the source of the Ichun River on its top. To give you an idea of its size, the entire colossal city of London would fit inside the Meseta’s rim.

I am departing in one hour for a town called La Paragua. The plan is o get to La Paragua and then to get into a motorized
canoe and depart southward upriver on the Paragua River for four days to get to Salto Ichun (waterfall).

I am going with Emilio and Carlucho up to Salto Ichun community of Shirian Indians. When we arrive, I will be let off. I will have at least one Shirian Indian companion with me, a hunter named Parato. He was on a previous expedition up the Paragua River, passing east of the Meseta de Ichun. In addition to Parato, the plan is that to have at least one other Indian hunter with me. The purpose of taking a hunter is obvious: they can find food, and they are adventurous sorts with curiosity for expeditions.

The goal is to penetrate up into Meseta de Ichun, west of the Paragua River between 4 and 5 degrees north latitude and 63 and 64 degrees west longitude. One objective is to climb one or more of the Meseta’s high points. A more ambitious objective is to try to bring or build two dugout canoes and paddle upriver to the source of the Ichun River, approximately 50 kilometers south of the “entrance” to Meseta de Ichun at Salto Ichun waterfall. The purpose is many-fold; the attraction is that there is no recorded expedition, scientific or otherwise, penetrating into the interior of Meseta de Ichun on foot.

The plan is that Carlucho, the man who knows the Indians, and Emilio, the map maker that knows Carlucho and southern Venezuela, my main contact, will turn around after spending a night in the Ichun community just near the waterfall.

I have two sat phones with me.  I have tested both phones and they work. I have at least five batteries and a solar charger. But possibly, the forest canopy will not allow a direct signal to the satellite. There is a radio in the Ichun community below the Falls.

The biggest objective danger is fauna: snakes (vipers and rattlesnakes), scorpions and spiders. We are carrying anti-venom but it is best administered by a doctor, as it requires injection. We are bringing syringes.

There are jaguar, but there is no danger from them and the likelihood of an encounter is very small. There is no known danger from crocodiles or alligators as they are very small. Getting lost is unlikely. Penetrating the interior may be difficult due to dense forest. 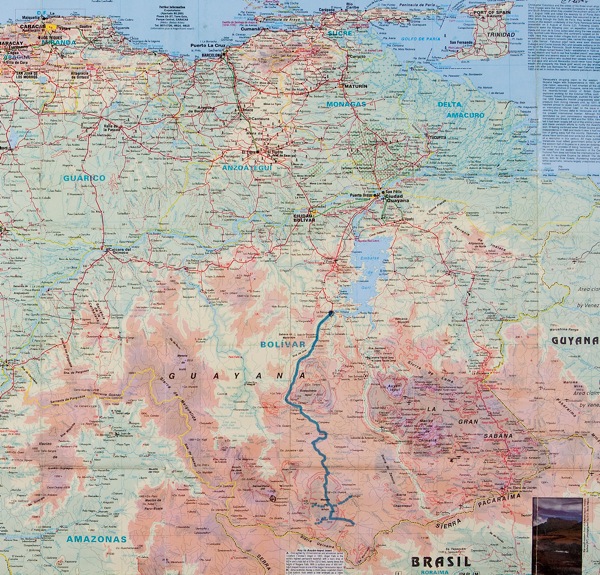 Today I leave for Venezuela and hopefully the very remote Meseta de Ichun.