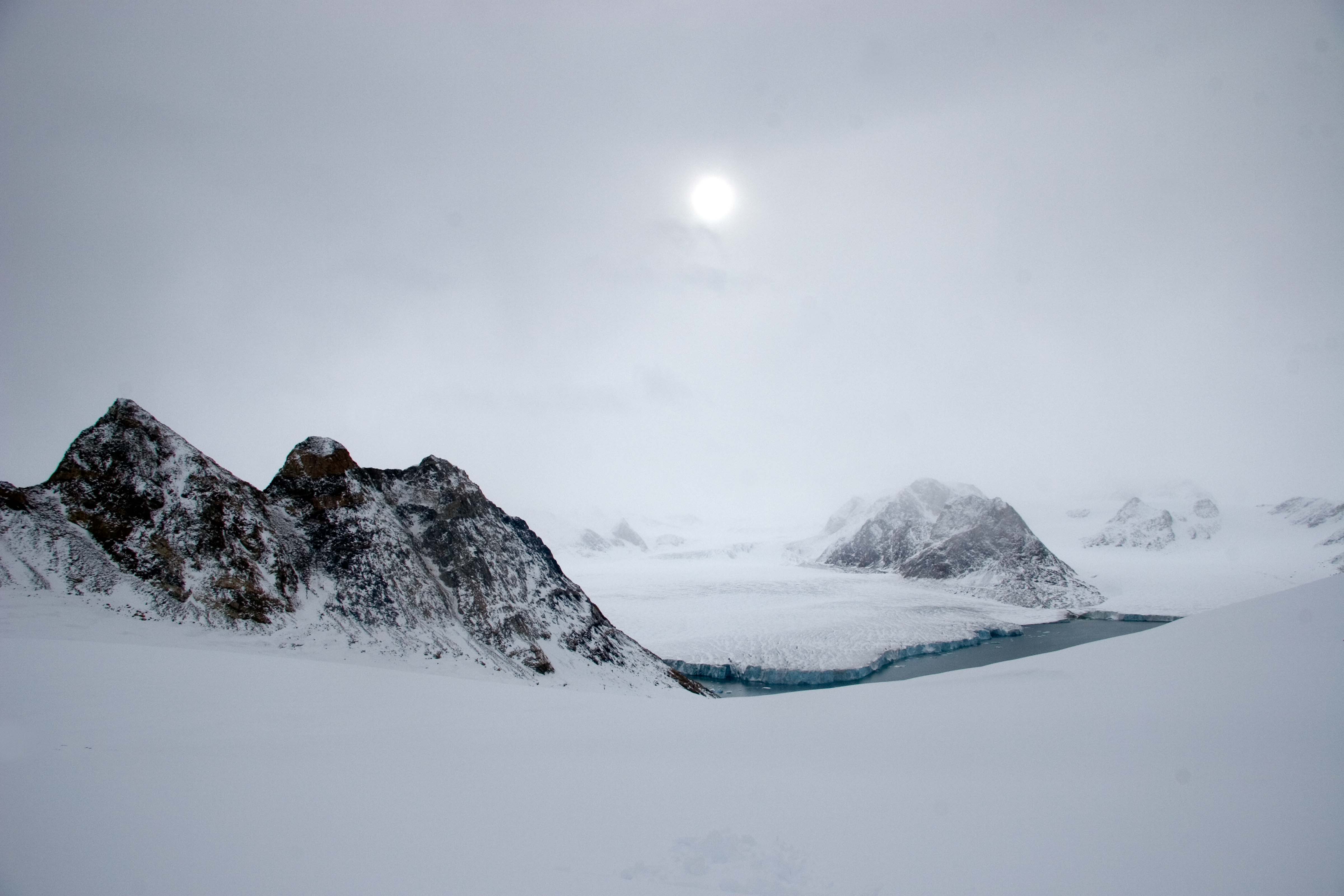 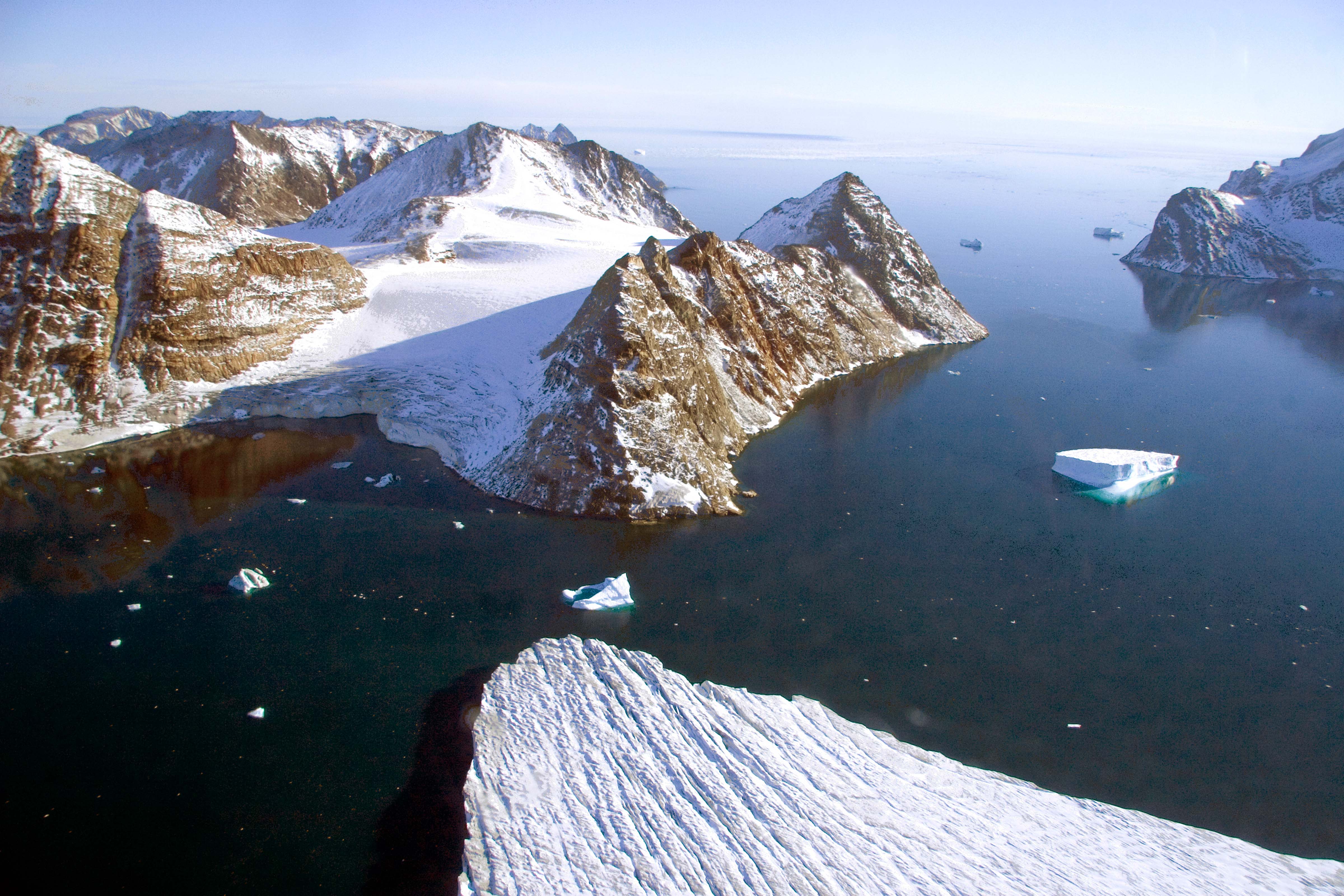 Warming Island Broken Channel Due To Global Warming, 2006 Greenland, Warming Island The snow bridge had melted. Whether the result of man’s activities or not, it was clear to us that the warming of the earth had caused this event. One of the team members, John Collins Rudolf, fresh out of journalism school, wrote an article. It appeared on the front page of the New York Times Science section on January 16, 2007. My photograph (above) accompanied the article. 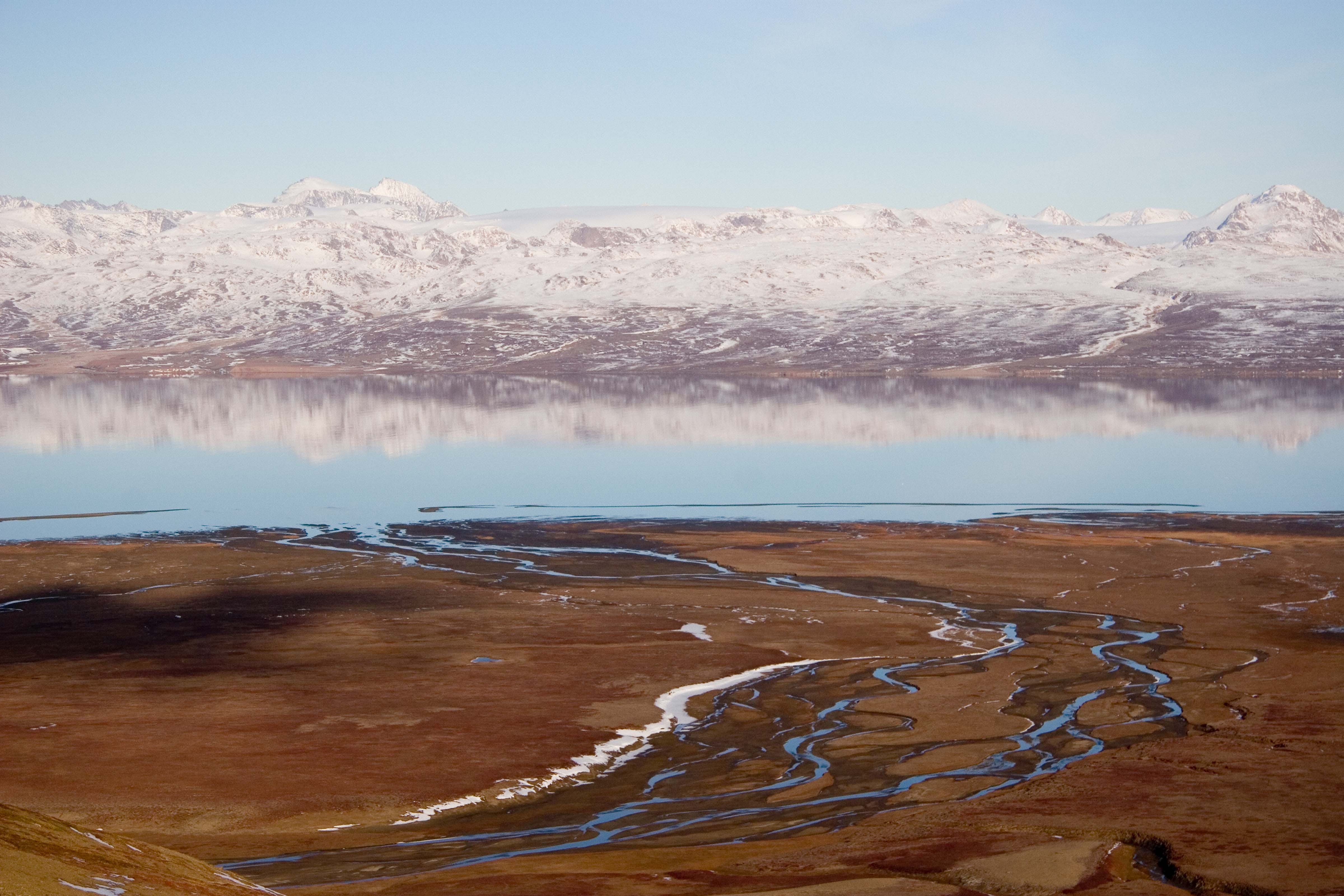 Helicopter rides are exciting, although I find them disconcerting…

We sped over east Greenland. Four of us were accompanying Dennis Schmitt. We were on our way from Constable Pynt. We were going to Warming Island, the focus of an important discovery that he had made a year earlier: an ice bridge had melted away, revealing that a piece of land previously thought to be part of Greenland was in fact an island. This was the first time he, or any or us – or, likely, for that matter, any human – would walk there. Our mission was to survey and verify. 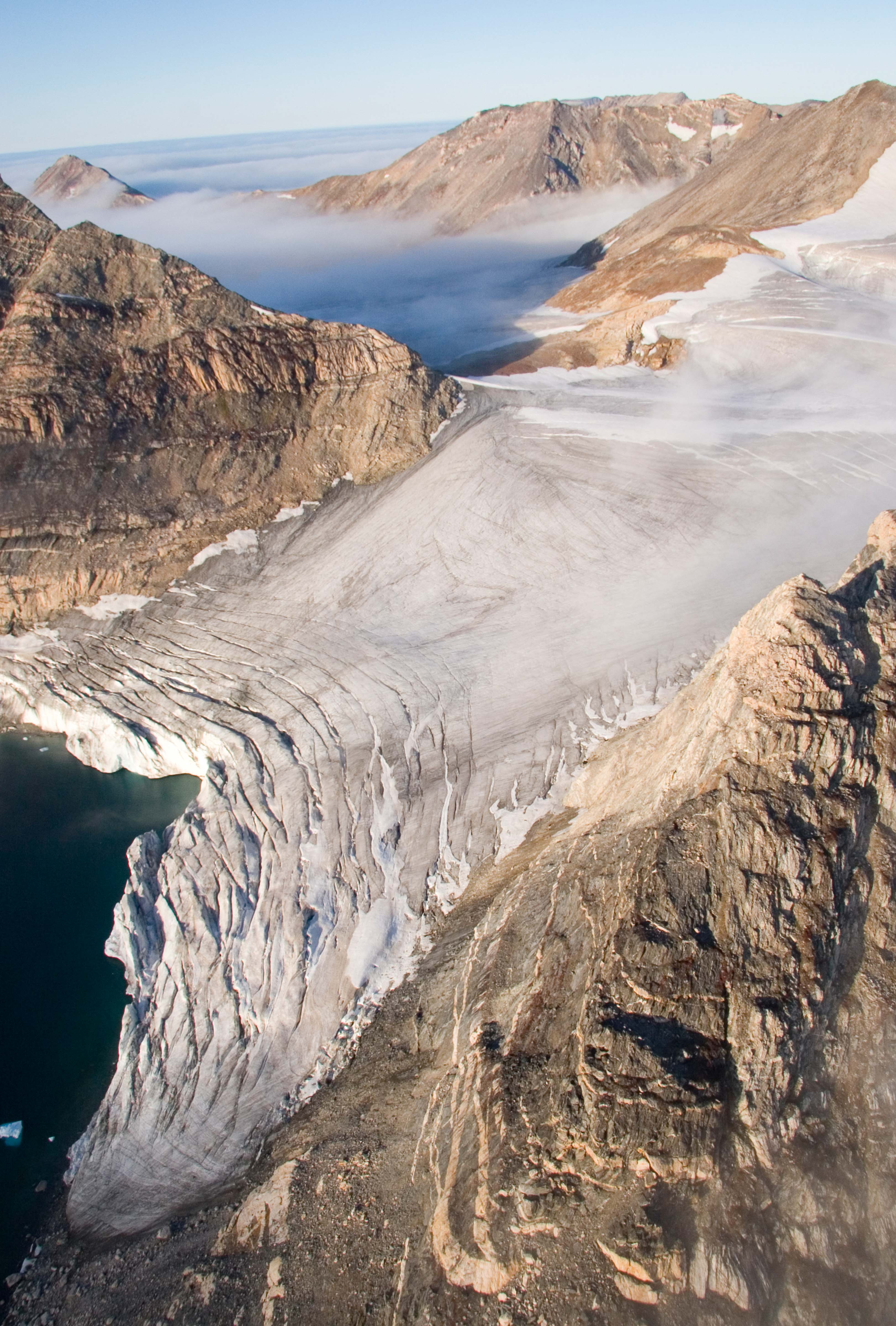 We pointed to a col between two mountains. The pilot took the helicopter down and rested it on the rocks. The mechanic got out to check the stability of the landing. We all got out and dropped our bags. That spot would be our camp. Off we went again. 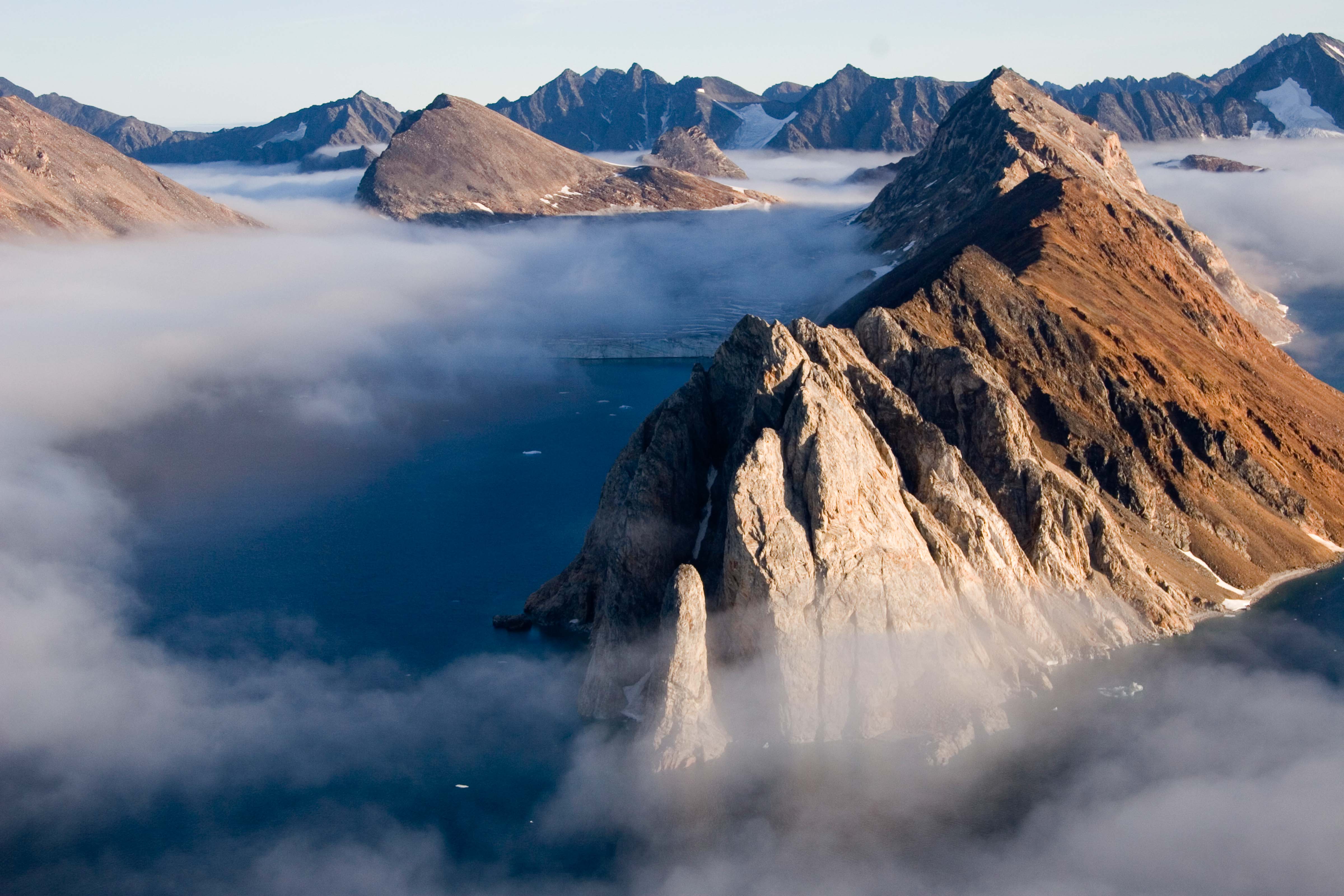 We flew along the great, fingered peninsula. It was several miles long and stuck out straight into the fjord that now separated us from Greenland. The scenery was incredible. Clouds drifted in canyons, the deep blue sea beneath them visible only in glimpses. The map showed it to be connected to the mainland by ice. We were in the moment of a historically significant event.

We flew back to our camp site. We settled down again onto the ground. Five of us got out: Dennis Schmitt, John Collins Rudolf, his father John Rudolf, Eric Ristau and myself. The pilot and the mechanic stayed in the chopper and sped away to Constable Pynt.

It took hours to set up camp. Once we were situated, we fixed a meal and hot drinks. It had been one of the most exciting afternoons of our lives. I opened up my cigar box. (Ten years earlier, I’d bought a box of Cohiba cigars in Cuba. I’d been saving them for just such an occasion.)

The light left the sky very, very gradually. The Northern Lights appeared. This is the first time I had ever seen them.

Last night there was a big storm, with winds in the range of 60 knots. In the morning, there was an arc of snow that went all the way to the top of my tent door! 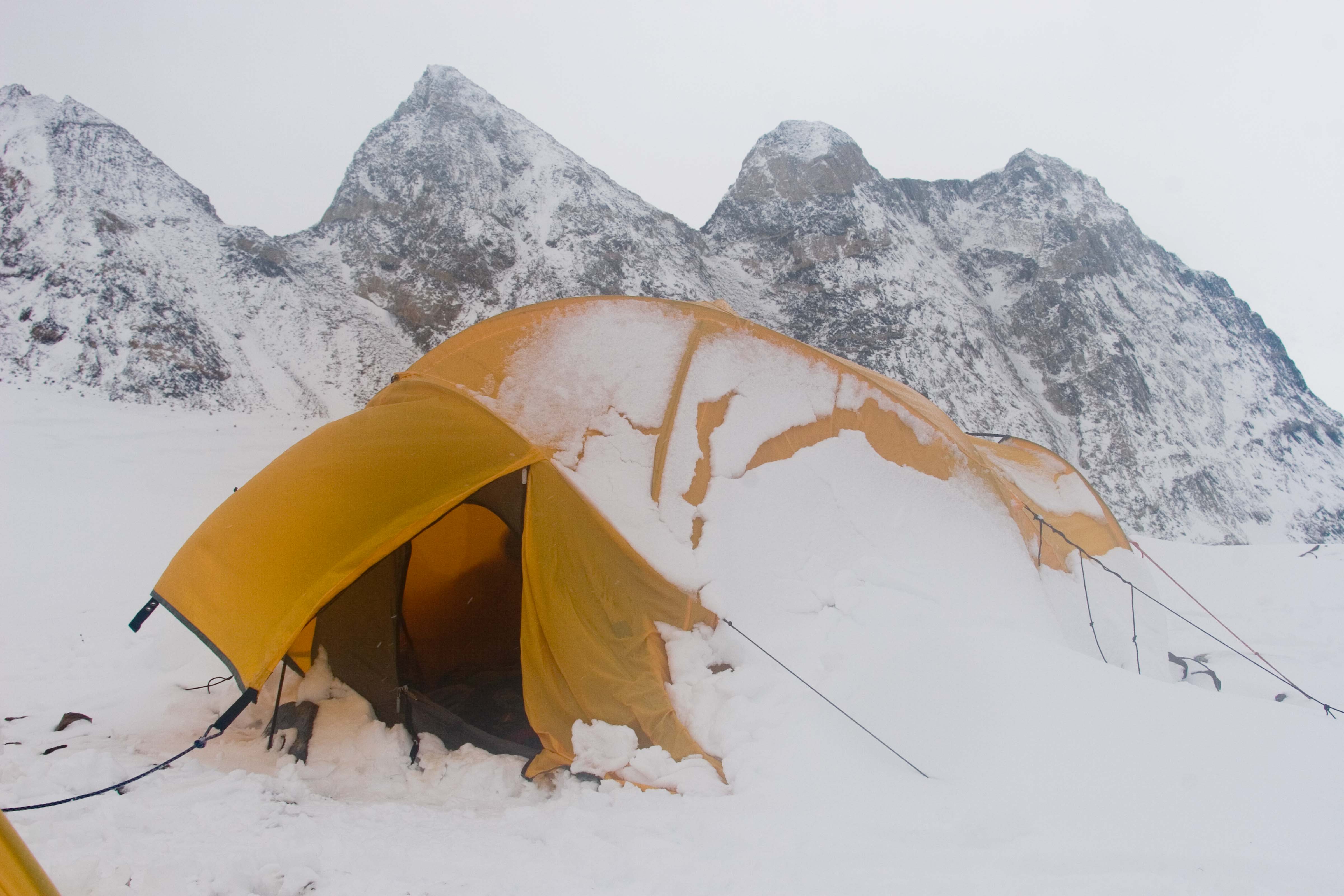 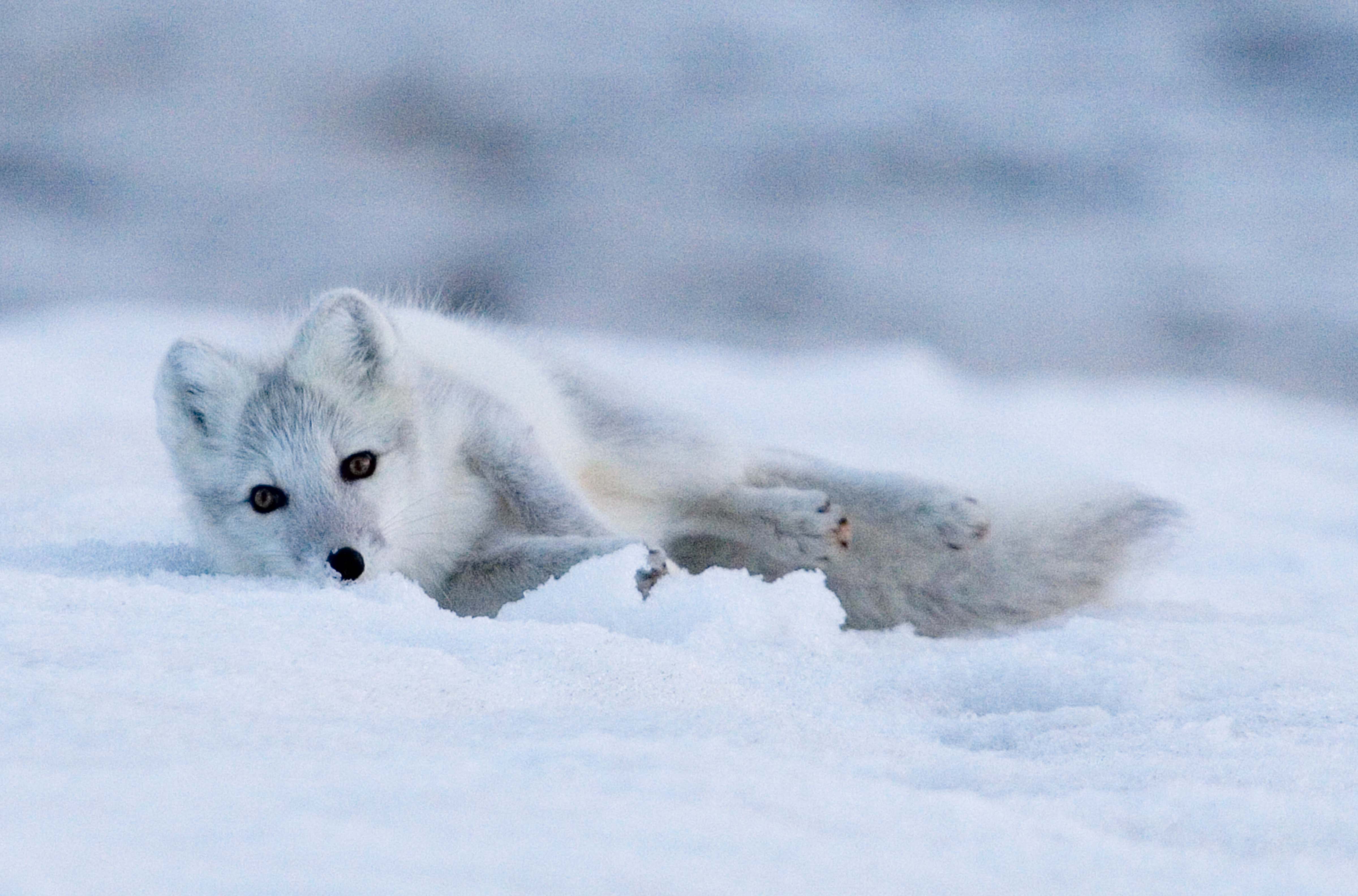 In the morning, a polar fox came to our camp looking for food. 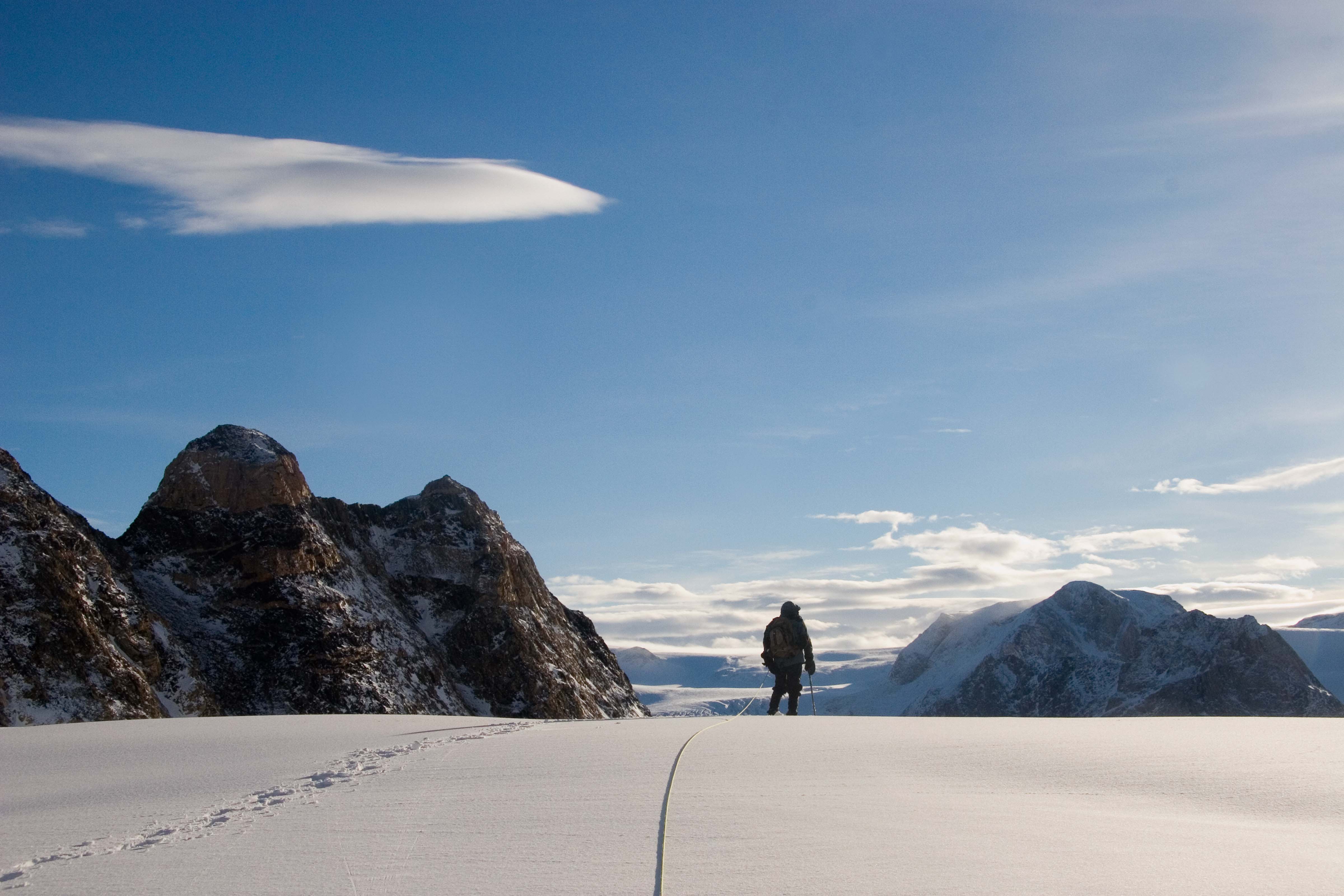 We went out today across the glacier. We had to avoid two hidden crevasses. We found a spot with a good view of the strait. 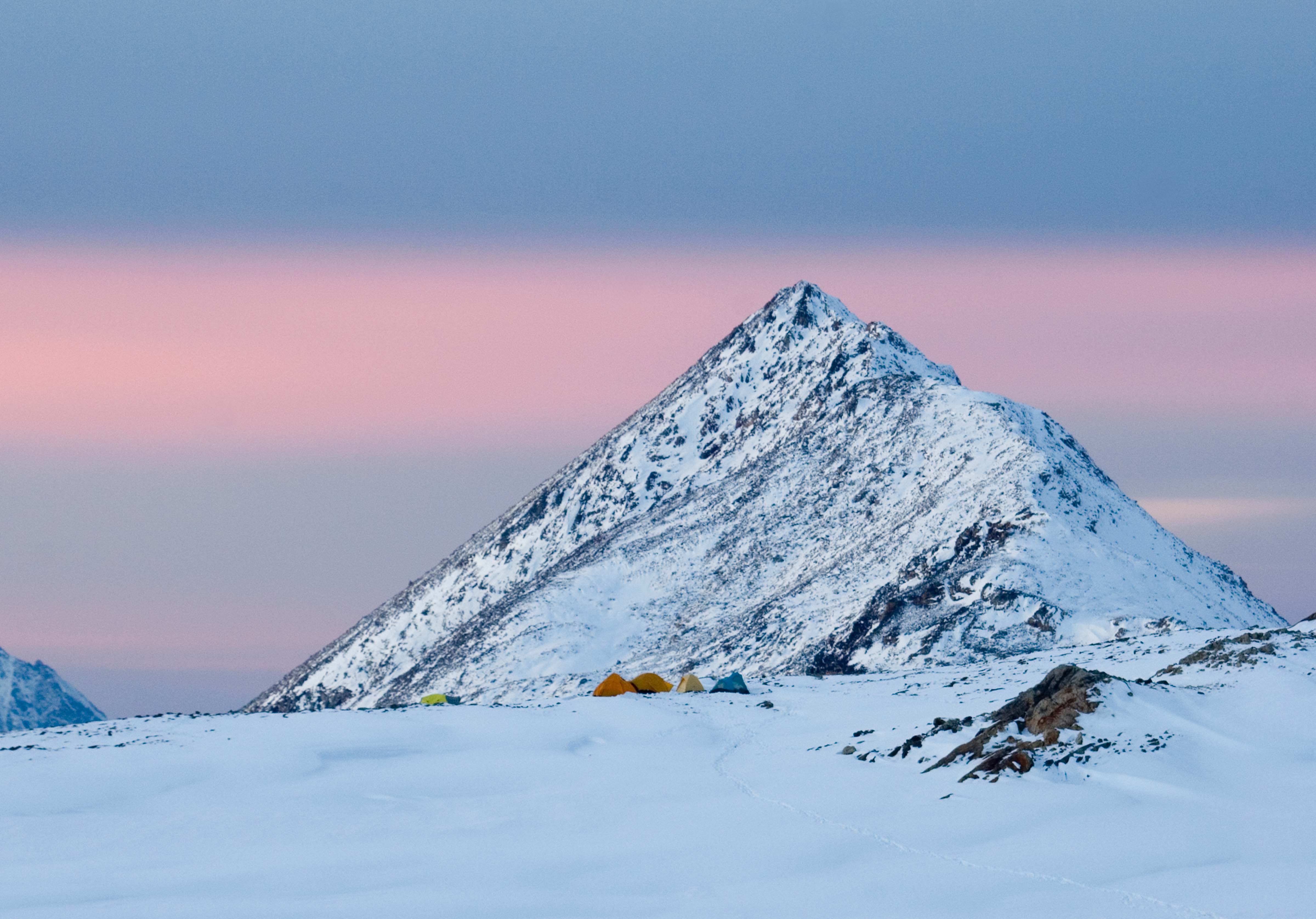 I stayed there to photograph the crimson sunset. As I started back, there was a rock fall about fifteen feet wide that fell not far from where we had been. It probably would not have gotten to us, but it certainly would have given us a good scare. 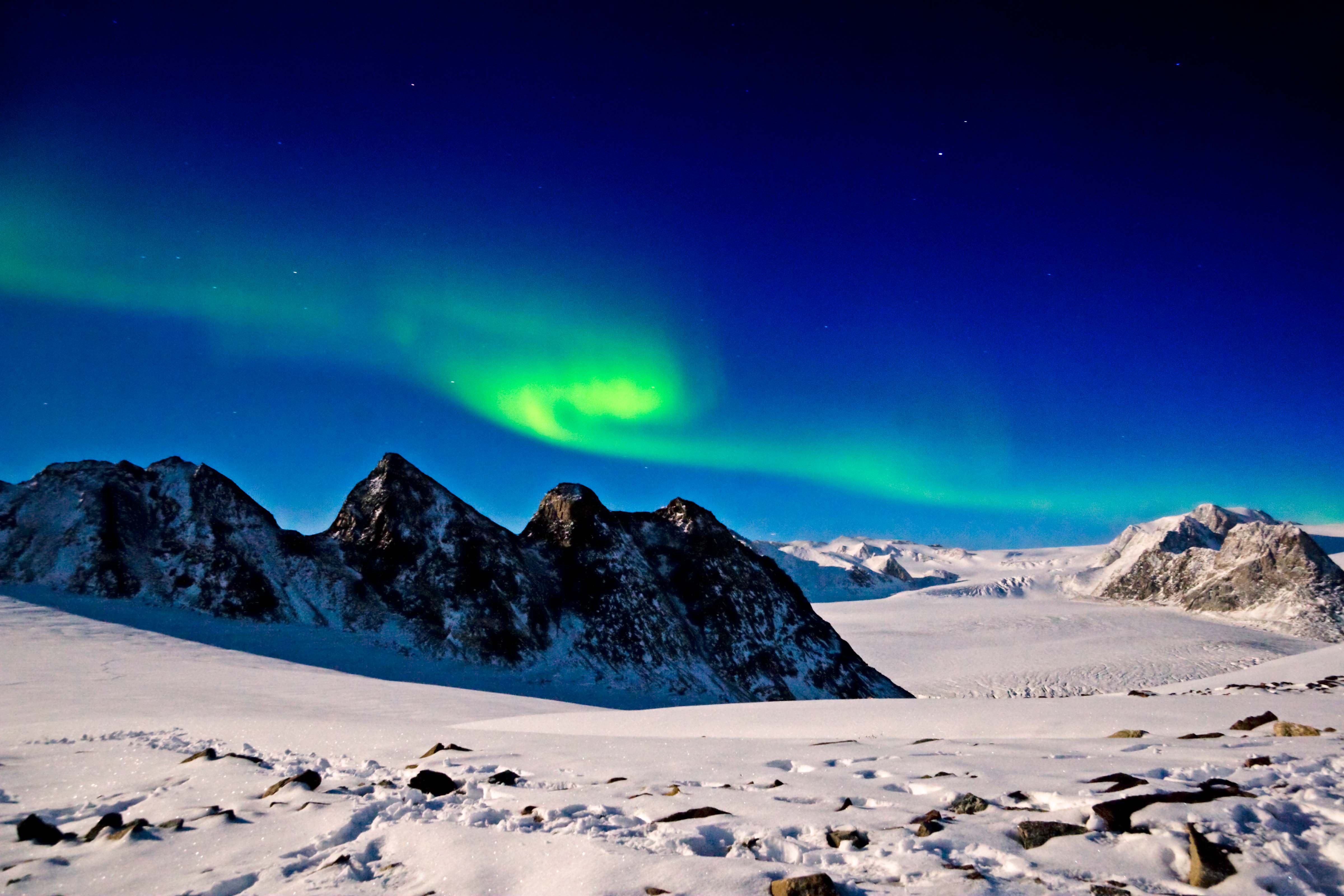 At night, I saw the Northern Lights for the second time. I set up the tripod and took a score of time exposures, most of them at 30 seconds using an ASA 400 setting. I was wearing only my tennis shoes with thermal socks. At first my feet were freezing, but later, in the excitement, I lost the sense of cold. John Collins came over and checked out my time exposures. Then Dennis stuck his head out of his tent. Later, Eric and I continued taking photographs. We would talk for a few minutes. Then the Northern Lights would appear. We would click our shutters, then continue talking! It was a spectacular evening!