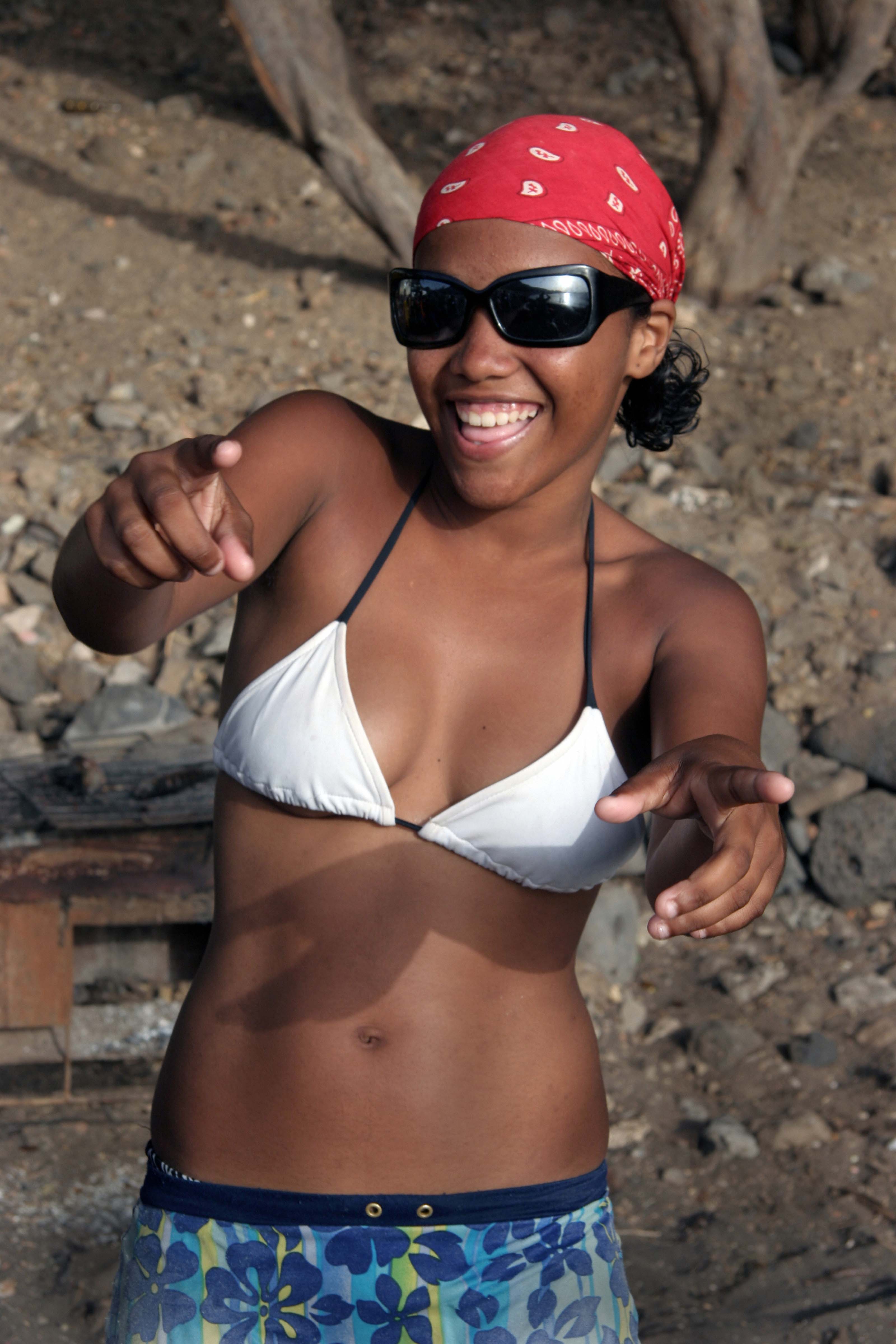 The Cape Verde Islands were the next to last destination on a voyage to the South Atlantic in 2006. Previous stops included the Falklands Islands, the South Sandwich Islands, South Georgia, Bouvet Island (the most remote island in the world), Gough Island (we did not land), Tristan Da Cunha (the most remote inhabited island in the world), St. Helena (where Napoleon was exiled), and Ascension Island. In Cape Verde, I had a day to roam. I met a girl named Ester, her mother, Deonilda and her sister, Yonica. We were walking together when I saw people dancing on the beach.

What I learned: That if you want to take a photograph of a dancing Praian, you have to dance with them first.

Ester and I walked down the street. When I said I was going to wander in the countryside, Ester said it was dangerous. I asked where the best place was on the island of Santiago. She said it was Tarrafal. After more conversation, I asked her if she wanted to come with me to Tarrafal. She agreed. She said she needed first to go to her house. We turned down a small street. I was fascinated by the cobblestone, especially the green one, which seemed worn with at least a century of use. When we got to her house, I got out my camera as she put her body up to the high door and called inside. Just then, a young woman’s face appeared. She looked so fresh! She disappeared. I asked Ester if that was her sister. She said it was. I asked for her to reappear. 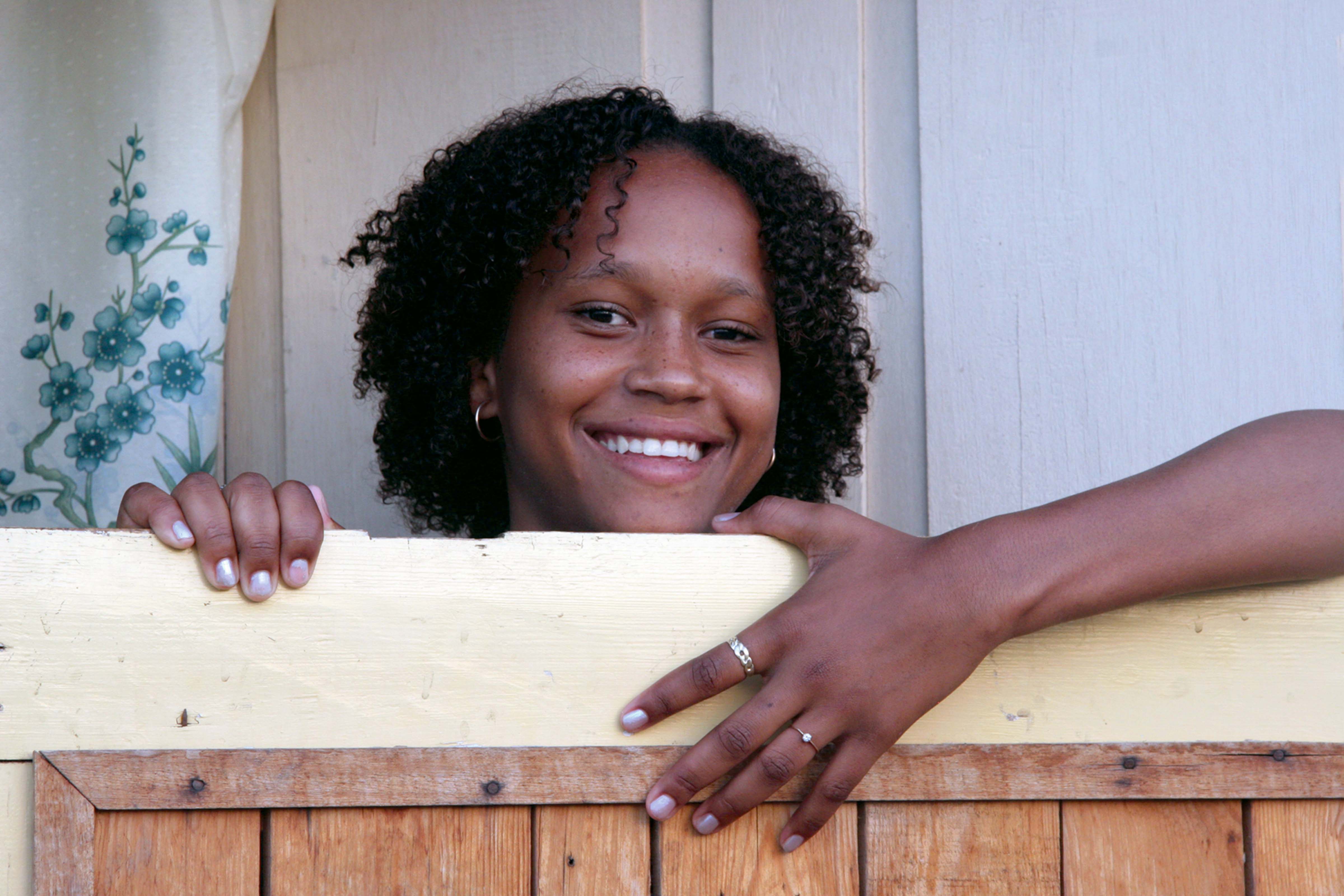 Yonica reappeared. She put her arms over the high door and let out a big smile. She was lovely. I was completely unprepared to fall in love! I took a photograph of her as she looked out from the door.

I was invited inside. I met her mother, a young woman with a pleasant face, her body heavier than her daughters’. I was asked to sit down. I said (in Spanish), “This is nice here, comfortable.” “It is poor,” said the mother apologetically. I took photos of Yonica and I showed them to her and the family. Deonilda, the mother, said that Tarrafal was a long way away, and she suggested that Ester and I go to Cidade Velha, as it was close and also interesting. I made a suggestion. Why don’t we all go to Velha together and have lunch? They agreed… The four of us walked together down the main street. I shot photos of us in a mirrored wall. We put our things in a taxi and sped off. We rolled down past the beach below the city and off along the coast. I turned around and chatted with them. Once in Cidade Velha, we got out. I asked what the best restaurant was. Yonica pointed and said something in Portuguese. (Yonica did not speak Spanish.) We piled back in the car and drove to a restaurant overlooking the coast. It was a perfect spot in the shade. It was extremely clean and seemed well-organized.

Yonica and Ester sat opposite Mama and I respectively, with their backs to the sea. I could not ask for a more lovely view. Lunch was a buffet, and we filled our plates several times each. Ester and Mama had two beers. Yonica and I had pineapple sodas. I enjoyed the fish, then tried the chicken. It was all very good. I found out that Yonica was 16 and Ester was 18. The girls went off on their own for a while. Deonilda and I sat and talked. She told me about their life. Yonica’s father was different than Ester’s. Yonica’s father had left before she was born. He had gone to America. For fourteen and a half years, he did not call once. Then, about a year and a half ago, he suddenly called. In all that time, he had not sent any money at all. She said, “He only called to get to know Yonica.” Clearly, she was disappointed.

When Yonica and Ester returned, I said I wanted to swim. We went to the beach. We walked along rocks to a small pool that opened to the sea. I got out my diving mask and snorkel and dove in the water. I swam out of the small cove over rocks scarcely a foot below the surface. When I came back in, I could not control the surge, and I scraped my arm, toe and ribs against the rocks. Once out of the water, I noticed that I had some splinters in my skin: sea urchin spines. Deonilda helped get a few out, but the thick one remained. Yonica used her fingernails to extract it.

Yonica gathered small cowries into an empty beer bottle. She was contemplative, absorbed by her activity. Ester pushed Yonica into the water. Ester smiled so beautifully. It was wonderful! Yonica lost her sandal. She got out and walked barefoot adeptly across the rocks to see if she could retrieve it. I began taking photos of her.

Ester stood next to me. I gave Ester a choice: either she go into the water voluntarily, or I would push her in! She said she was going in, but she did not. I grabbed her hand. I looked at Mama. “OK?” I asked permission. “OK!” came her reply. I pulled Ester down to the water.

Two lovely, scantily-clad young women passed by, and I shot a photo. One of them saw me and pointed me out to the other. I shot another photograph. I wanted to take a closer photograph of the girls, but they had walked away. I followed in their direction. I could not see them. Then I saw that down at the other end of the beach, people were dancing. Maybe they had gone there. I went to find out.

I spotted one of them. She was dancing by herself on the beach. She wore a red scarf on her head. I climbed up on a beached boat just next to her with the intention of photographing her. Other bikini-clad girls saw me and beckoned for me to take a photograph of them. They posed for my camera. Now I had only enough memory for two more shots. The lovely girl with the red scarf moved down towards the water. I followed. A young man said that I could not take photos of her. Immediately after saying this, he moved aside and waved his arm, welcoming me closer to her. Then I understood: I could take her photograph, but I must dance with her!!

I had my pack on. I walked to the girl with the red scarf. I started gyrating my body. I put a little effort into moving in a sexy way. I heard yells of approval from the group of lookers-on. It was a scene! I got even more into it! Then I said in Spanish, “OK, now I can take the photos!” I lifted up my camera and shot photos of her body as she looked directly at me, swaying in a sexy and provocative manner! It was a thrill. Suddenly, I felt the crowd’s approval dimming for some reason. Then I realized Ester was there. They were probably thinking she was my girlfriend. “Jeff, we must go,” said Ester. Deonilda and Yonica looked on. “I am sorry, Mama.” “No, it is OK! You are a good dancer!” she said approvingly. Yonica, Ester, Deonilda and I boarded into the back of a red local minibus. After several stops to pick up more passengers, we struck out for Praia.